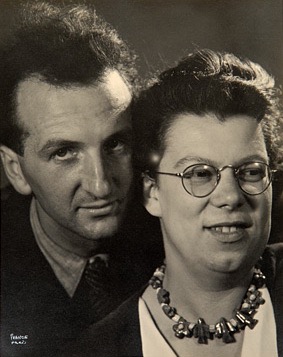 Jean Lerat (1913-1992) and Jacqueline Lerat, née Bouvet (1920-2009), his wife, are two French ceramists. Jean and Jacqueline Lerat settled as potters in La Borne, in 1943, while the ceramic tradition of this town is in full decline. They choose a mode of artistic expression using sandstone and wood cooking. They continue the tradition of potters installed in this village since the sixteenth century: a pictorial ceramic popularized by Marie Talbot. Their initial production consists of functional pieces: bottles, tobacco jars, vases and figurines of religious character. Their works are in the spirit of Paul Beyer, who also worked at La Borne, and whose oven they use after his disappearance. From 1955, their style broke with tradition. A new step is taken in their workshop in Bourges where they are now experimenting with sculpture and developing a more secular production. At that time, they participated in the New Modernity movement. From 1965, they stopped using utilitarian ceramics and salt cooking to devote themselves to ceramic sculptural art. At the same time, they teach ceramic art at the Ecole des Beaux-Arts. Among the students, Elisabeth Joulia learned filming in the studio of Jean and Jacqueline Lerat in 1949. There is a long friendship with the Lerat family.